The last post ‘Tartan Brawl 2012’, was the 250th post I made on this blog.  Considering I didn’t think I would reach 50, I am pleased by this milestone.  So thank you all for following me, while parts of it have been a joy (Becoming a PG); others have been a torturous journey (Scaverous Build).

I’ve learned a lot too, from yourselves and from the processes that I have gone through.  So here is to the next 250, to get me to the 500 mark.

If your reading this blog, naturally you have an interest in wargaming or gaming in general.  I’ve been doing gaming for many year, but there is always new things to learn; or tricks that make our experience better.

Privateer Press Insider for today, is all about model building; something I have had many frustrating times with.  The model used for this is Lord Exhumator Scaverous, which I have built and actually blogged on this site way back in June.  So to see the professionals do it, was not only brilliant; but showed me a few tricks that I will be using in future.

The first thing I learned was Bone Pinning, something that I had not thought to do.  The reason I never thought of it, was aesthetics and making more work than necessary.  The thought of drilling right through a piece, makes me cringe even thinking about it; it goes against everything I believe.  Seeing the professionals do it, makes me question my irrationality.

The second part is simply Blue Tack.  Sticking a dod of blue tack on the rod, before cutting, is one of those simple ideas; you think your an idiot you didn’t think of it before.  So now I am off to source some blue tack and a dunces cap, seems I will be wearing it for a while.

Taken me a while to get my painting mojo back in gear, but here is a quick photo update on the progress of Feroa. 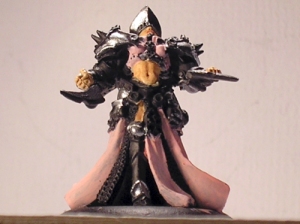 Last month Wrath was released, causing a stir among the players of Warmachine and Hordes.  The first expansion to MkII, it gave players of Warmachine factions, a little more detail on new models and the continuing story of the Iron Kingdoms.  In honor of this, I had organized a steamroller tournament; in which the winner would get their hands on a free copy of the book.

This was actually my first tournament ever, run by me in Worlds at War. Sadly I didn’t (and still don’t) have Pressganger status, so this couldn’t be called official.  That didn’t stop it being a great event and day for all concerned.  Of the 12 players booked in, 10 appeared; lists in hand ready to do battle.  I used a piece of software called Dohyou 1.1.2 (though this is also a good program LostBlue), which made things easier; but a little more complicated.

Look at the concentration

Other than one problem with final round match ups, the day went really smoothly and ended within the timeframe I had hoped for.  The biggest joy of running this event, was that we had 3 players, who had never played WM/H in competition.  Sometimes it can be scary, but these guys did really well; winning a couple of games as well.

The eventual winner, was Michael Murray; deserved winner with a demolishing 4 – 0 record for the day.  Close second and third were Stephen McLeish and Tam Fullard; with Stuart Walker one of our first timers claimed the wooden spoon.

Despite my nerves, it was a good day; so roll on 27th August.

On Thursday, I got to finally run Scaverous in a game.  I actually got two games at the shop, first against Cygnar (Stuart); then against Retribution (Jonathan). The 25pt force I ran for both games was this:

The problem I found with this list, is that there isn’t enough arc-nodes. Scaverous has some great spells, like Excarnate and Death Ward.  I just found he was getting too close to the front line, without arc-nodes.  So for the 35pt game agaisnt Mark, running Cryx; I changed it around a little.
Against this, Mark ran
My plan, given the problems against Cygnar/Retribution; was to keep the Ripjaws defensive; keeping the arc-nodes mobile behind the front line.  First turn I ran both the McThralls and one Ripjaw, casting Dark Ward on the McThralls to give them DEF 14.  This actually served me well, as almost till the last turn; there was one stubborn McThrall fighting hard at the end. In hindsight, I should have used Death Ward on the Ripjaws; giving them DEF 17.  With Armour Piercing attacks, the pair of them could have ripped the Deathjack apart themselves.  As it was, the McThralls managed to do some damage; with the Bane Thralls helping along the way.
The tides of battle though, were going against me.  Mostly because Mark kept using Mage Blight.  With this and the fact that half of Scaverous’ spells target living models; it was crippling me badly.  As we were both using some new models, or proxying others; there were mistakes on both sides.  The Harrower was poorly used, as I forgot Ghost Shot.  Which could have helped clear up the Banes on the left side of the board.  Instead I used Ghostly on a Ripjaw, which charged Mark’s Tartarus through a wall.  The Ripjaw was subsequently ripped apart by Banes and UA.  The other Ripjaw was the victim of a ghost in the machine.  The Machine Wraith was more of an inconvenience, then a real threat; being expelled from the Ripjaw and later the Harrower.
I think the biggest mistake Mark made, was using Soul Gate on his Deathjack (DJ).  He removed a Bane Thrall near Scaverous, to move DJ within charge range of Scaverous.  Problem was, Soul Gate doesn’t allow the jack to activate; so it was easy pray for Scaverous.  While Scaverous is not a melee caster, with help he can be devastating.  On my turn, Ripjaw turned on the DJ; crippling the movement.  Base DEF 7 on the DJ, which was only compounded by Gorman Di Wulfe throwing Black Oil on it (DEF 3 now).  All Scav had to do was charge, two attacks both boosted damage; one dead Deathjack.
On the other side of the board, Ragman and the one remaining McThrall; were running the Revenant Crew ragged.  After they had gone, there was little else I could do.  I had Scaverous, Harrower and Ripjaw left; with little offensively I could do against Goreshade and his feat Banes.  It was a great game, that I learned a lot about Scaverous.
Conclusions about Scaverous –