It’s been a week since the Scottish Masters, unfortunately due to a car accident; this is the first chance I have had to report on what happened. Before I do, no one was hurt in the accident; other than the cars themselves which is the main thing.  Suffice to say after the elation of the Masters, this week has been one disaster after another. 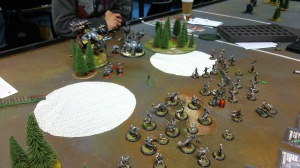 Anyway, we eventually had 24 players signed up; of which 23 managed to make it through the Scotch Mists that descended over Scotland.  5 rounds in one day was going to be ambitious to say the least, but we kept the games running pretty much on time throughout the day.  Round one saw 2 players arriving late, but thankfully not late enough; that they couldn’t quickly get right into the action.  Full list of players and factions played, with my personal surprise being the number of Khador players attending.  It should be noted, that there were a number of newer players; to the both the game and the Scottish tournament scene.  Steve Moffat in particular had only been playing around 6 months. 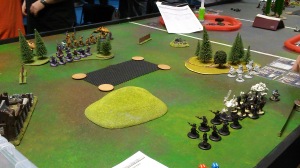 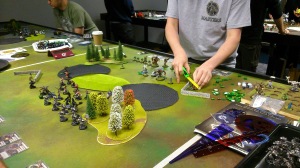 Big thank you should got to Steve, the owner of Common Ground Games; as well as his staff for everything they did.  We arrived to the tables already marked out (4’x4′), with a smaller 2 foot space for player to place their trays and gear.  A lot of the comments from players, were positive about the venue; staff or the food throughout the day.  There is something surreal, about having a cheese and ham toastie brought to your table as you play.

So who won? Well despite our best efforts to play 5 rounds, we had a clear winner by round 4; so consulting with Frazer Penman the other PG we called it time at that point.

The Clan Chief of Scottish Warmahordes

Hard fought, but it’s mine now!

I’ll upload the rest of the photos taken throughout the day, but I want to thank all the contributors to the event – Battlefoam, Bases4War, Micro Art Studio, Warbases, Firestorm Games and Privateer Press.  I would also like to thank Frazer Penman, Steve and staff at Common Ground Games and most definitely my wife Julia; who was fantastic keeping it all straight with the admin and scores.  Here’s to Scottish Masters 2014!

I would like to first of all thank Andrew Galea, for getting back to me so promptly over the issues I raised with Rankings HQ.  Through a couple of emails and communications in Rankings HQ; we have gotten the problems sorted and things are back on track.

The customer service since he contacted me, has been excellent and I feel this recent experience is a one off situation.  Hopefully when the planning of the Scottish Master 2014 comes around, we’ll be turning to Rankings HQ to handle the hard part for us.

Now being a PG, some might say that I hate the competition; especially one in particular.  This isn’t true, GW have been a staple of the British high street for over 30 years.  They have brought many Warmachine/Hordes players into the world of gaming and will do for many more years…..hopefully.

I say hopefully, as I’ve been seeing a lot of people posting pics on Facebook; of the new 40k models and one thing struck me just now….the pictures look shit.  Now I don’t mean the models themselves, before all you GW fans break your knees jerking them; I meant photo composition wise.

They show you bugger all of the model; except some hazy outline with splashes of colour.  They are usually multiples of models, instead of a single shot of one model in high detail. One picture I saw, was of giant blue oversized power armour, that had an intense bright light shining through the legs; like his genitals were on fire.  So GW, a little advice from a complete noob like me.  If your going to highlight your products, at least make the effort to show your craft in the best possible light….not through the genitals.

Ok, so it was this morning; but there was still a heavy thud on my doorstep.  A package had arrived from Bob at PP, containing faction coins and some little surprises.  Big thanks to everyone at PP, as well as Steve at Cerberus for putting this together.

Can you say shiny? 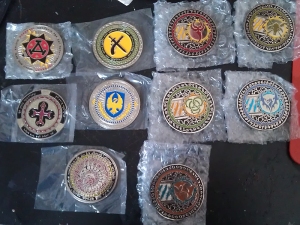 We have both Warmachine: 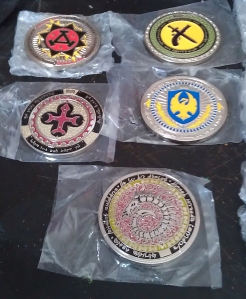 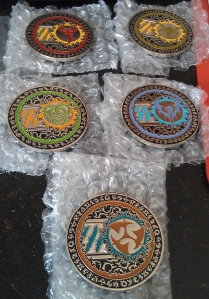 Those of you sharp of eye will notice something wrong, but I’ll not spoil it for you.  Along with the coins, there was set of 6 Steamroller dice; which we will most likely be giving away as spot prizes on the day.  We’ve only just started this and I’m excited about it already.

Things are progressing at a rapid pace just now, with lots of ideas coming forward and also so great news.  Going go add a sticky to the site, with all the details of people who help out with this event.  There will also be a dedicated page with the same info and details of what they have done.

So first up, a big thank you to the guys at Privateer Press (EU) and Cerberus, who have put together a little pack of goodies to be used towards the prize support. Included in this, will be a faction coin for every faction available; except Convergence.  I think these will be hotly contested Best in Faction coins, which is always good to spice up the rivalries on the day.

In other news we are sourcing some potential awards, for both Top 3 players and the Top 3 for the painting element.  As a painter, I always want to promote this side of the hobby; no matter what people’s ability levels are.  We also hope to offer a little prize money/tokens/credit as well, but from talking to the players; the honour claiming Best in Scotland is what matters most to them.