With just over 2 days to go, the final stretch goals are within their grasp.  Dark Seduction is very close in, just under $6,000 to go; but this might already have been achieved as Paypal money hasn’t been included yet. 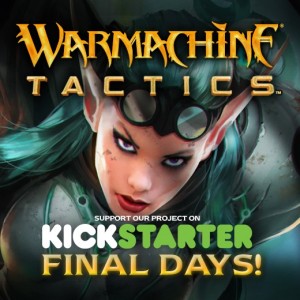 The images are banners and pictures for people to use on their Facebook pages as well; to help spread the word about the Kickstarter.  You can get them here, where you will see they have faction specific banners; so you can show your colours to make your stand.  If that wasn’t enough, there is also some great backgrounds for your computer.

So unless you have missed it, Privateer Press Interactive; in partnership with Whitemoon Dreams kicked off their Warmachine:Tactics Kickstarter computer game in explosive style.  If you not sure what this is, check out the video

Within 35 hours, they have broken and fulfilled their initial target of $550,000.  8 Days into the 30 day limit, they are nearing that magical $1m target.  Check out the Kickstarter, as stretch goals are being added almost daily; with the speed at which this is being backed.  Oh and if you’re outside the US; take a look at the updates BEFORE pledging as shipping is a lot cheaper than initially expected.

I’ve pledged at the $40 (Deadeye) level, which will give me the digital download of the game + an exclusive Kickstarter only model & coin due to be released in April; before the general release of the standard model in June next year.  After all the Kickstarter models have been send, the moulds will be broken and never produced again.

If you’re a fan of the tabletop game already, check out and subscribe to the Whitemoon Dreams Dev Diaries; where they hope to show what they are doing to bring this game to life.

Whether it is browser based or client server based (i.e. WoW), there is one thing that is guaranteed to be included in these games.  This would be immature players, who take it way too seriously for their own good.

So DrHydro, if your reading; say Hi to all my readers.  I’ll save you the embaressment of having your comments posted here, but seriously you need to take a Chilax Pill and get out more.  Oh for what it’s worth Hydie, using rape and sodomising in the same insult; well seems like duplication to me.  Try spacing them out, so you have a bigger impact from your insults.

Been a little quite this week, still fighting the anemia; plus I have to confess to being distracted.  Last week I mentioned OnLive, the gaming service; where you can play games without owning them.  Well as part of their launch, they were offering a game for £1.  So the newly released WH 40K: Space Marine, yours for a £1.  I believe you could pre-order the likes of Saints Row 3 or eagerly anticipated Deus Ex:, for a £1; but you had to do it before 9th October 2011.

Despite being impressed with how it preformed on my system, I didn’t think Space Marines would be the game for me.  So instead, I have been distracted by a game called Assassin’s Creed Brotherhood.  A little more sedate, than Space Marines, it reminded me of a game I loved many years ago – Thief.  Anyone who remembers this series, will see why Assassin’s Creed would appeal to me.  I admit that I haven’t played much of it, but what I have played; the story seems well written. It also has that creative narrative RPG feel to the game play, which other games seem to lack these days. I am sure Space Marines is a great game, but running about shooting Orkz all day; sounds positively boring.

The first official trailer, for the up and coming Warmachine video game has been released. With some nice in-game footage to drool over, as well as a look at some of the other factions.